A Tale of Two Kids 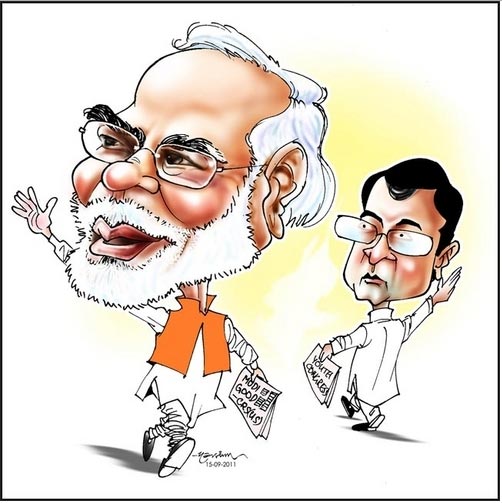 Disclaimer: All characters in this story are fictitious. Any resemblance to real persons, living or dead, is purely coincidental.

Once upon a time, there used to live two kids in a small town - Rahul and Narendra. They were neighbors, and like most of the neighbors, they didn’t like each other much. And the bone of contention was – both wanted to be head boy of their class. Rahul’s family was rich and powerful unlike that of Narendra. And Rahul, like most of the spoilt brats, was arrogant and thus not answerable to others. He used to go to foreign for prolonged holidays and was rarely visible. While Narendra was regarded quite arrogant and obnoxious too, he was still seen as a studious kid who performed well in all sorts of exams.

There were certain striking similarities and dissimilarities between the two. Both were essentially there because of the backing of their “Pariwaar” or family. While Narendra’s family members were fond of wearing knickers, Rahul’s liked to wear a tag – “family of martyrs”. When it came to fashion, both of they put most emphasis on sleeves. Rahul liked to roll up his sleeves with anger on his face. Narendra preferred sporting short sleeves even in utmost cold of Delhi. Rahul also had this uncanny habit of tearing answer sheets of other kids. Once he did it to his fellow classmate Akhilesh.

However, the best thing about Rahul was his looks and his friends in the class used to call him the “kid icon” of the school. On the other hand, Narendra had a facial blemish that he acquired during a squabble between two sections of kids when he was monitor of that class. He always claimed that he had nothing to do with this squabble and tried to prevent it, but some kids who liked to put on Kurtas, spectacles and Chappal while carrying Jhola bags always condemned him. The gang of these kids was called “intellectual kids” during those days. Surprisingly, they wore the spectacles with the lenses in red color, and therefore, whatever they saw was through the red colored lenses. Well, this chap Narendra was also quite stubborn and never yielded to their demand of apologizing to school for that squabble.

For the post of head boy, both worked hard and it took a toll on them emotionally. Rahul sobbed with his mother at nights. Narendra stopped listening even to his “Pariwaar” and people started labeling him as a dictator.

Well, this was going to be a long story but I cannot write it any further, because I’m facing writer's block now. I wish I’d overcome it soon after May-June 2014. I assure you I am going to complete this story for sure. Till then, bbye friends!
Posted by Pratik Pandey at 7:39 PM No comments:

Read in Your Own Language